A container can be thought of as a light weight Virtual machine that are in itself a portable linux environment. They help with reproducibility and dependencies required to run a script, program or pipeline.

In order to use the container you will need to load the Singularity module on your HPC resource or install it on your local machine. This will vary from HPC resource to HPC resource. You can find what your HPC called the module by using the module avail command. In many cases it will be as simple as the command below.

Finding and Downloading a Singularity Container

There are two main places that you can find containers that will work with singularity.

First go to Singularity Hub and locate the container you want through the search box located on the left side just below the ADD A COLLECTION button and above the list of containers. 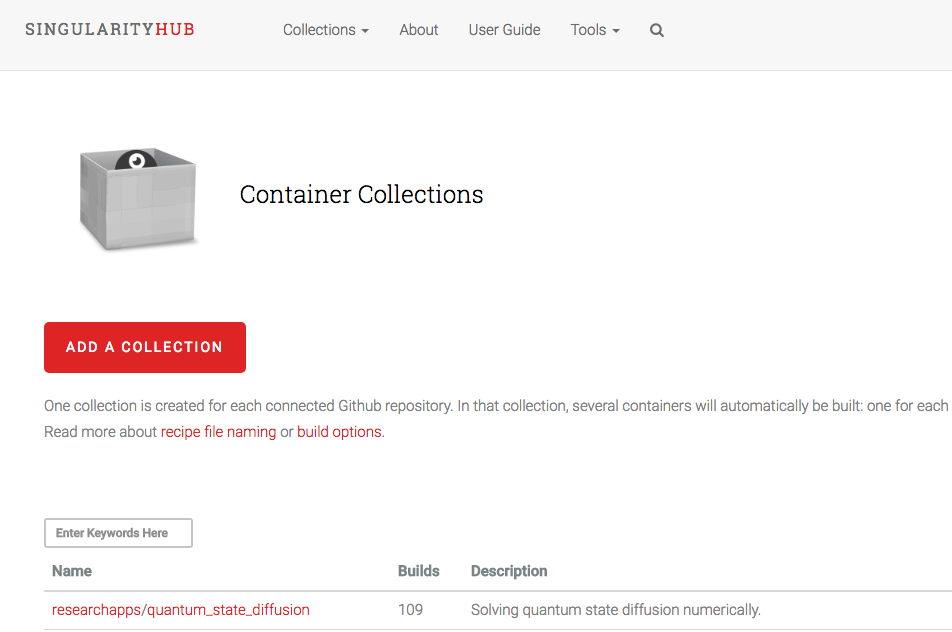 For this example searched for ISUGIF and will download one called utilities. First you click on the utilities part of the link which will bring you to a page that looks like this:

The uri is the important bit of information you will need to download this image using the singularity pull command. Unfortunately, there is no easy way to copy this so I typically just copy the header and then manually type in the container name (:utilities.1.0.0) in the command below.

If you get a CERTIFICATE_VERIFY_FAILED: error then you can set your python certificate verification to off. export PYTHONHTTPSVERIFY=0

Containers often have runscripts that will provide you with useful information on how to use the container. The run scripts get initiated by executing the image as follows:

Which in this case produces a list of files that can be called by the image.

As I mentioned above, these are useful scripts often used in our group. One script borrowed from the Assemblathon paper, new_Assemblathon.pl, we use when evaluating genome assemblies and want to get a summary of the assembly statistics. To use this script via the container we can execute it in the following manner.

This way of executing containers is kind of tedious as it requires so much more than just the new_Assemblathon.pl script that you could just download and place it somewhere in your path. Later in this tutorial, we will show you how to create a bash script wrapper that will simplify calling the function from within the container. In most cases creating a container for a simple script (perl, python, bash) doesn’t make sense as it creates a small overhead to load singularity and the container before executing the script. Where containers shine, is when your script or pipeline requires lots and lots of software prerequisites (for example: a specific version of perl, blast, qiime, samtools, etc)

We ran the new_Assemblathon.pl script from the container on a spirochaete genome we had handy and it produced the desired output.

How to install and use Singularity on your locall machine (Mac)

If you want to explore containers on your local Mac you canfFollow the directions on this website http://singularity.lbl.gov/install-mac

Note: You may need to issue the following command if you update your operating system or get a new computer.

Starting a singularity Virtual Machine (VM) instance on the Mac

If you are using your local machine, this will allow you to not only execute containers but also build containers from recipes and test them out.

Running a command using a Singularity container. (Same as above)

transferring files off and onto a local vagrant virtual machines

You probably started your vm and realized that you can’t access any of your files to try out the command above. If you are running a VM locally to use singularity, you can transfer files to and from your VM using scp and the VM private key.

Then using that key scp files off of the virtual box from a newly opened terminal that is not in the VM.

or transfer a file to the VM.

creating wrappers for the singularity commands

Here is an example bash script wrapper for a singularity execution of a command in a container.

to execute the script via the singularity container.

To create your own containers see the next tutorial

How to create your own Containers